Directing and writing credits:
"The Nanny and the Professor" is directed by Peter Lauer, written by Scott Kaufer. This is Lauer's only episode of "GG," but he's worked on a bunch of other cool shows like "The Secret World of Alex Mack," "Pushing Daisies," and "Younger." His claim to fame (according to my brief Google search) is directing "Cry Baby Lane," a Nickelodeon movie that aired once during Halloween weekend in 2000 and then was swept under the rug until someone wrote a CreepyPasta about it in 2011. Nickelodeon pulled it after parents complained (it was scarier than the usual far), but I guess it's more fun to imagine that the film was "cursed" and part of some larger conspiracy. I haven't seen the film but it's available on YouTube.

Kaufer worked on "GG" for most of S4 as a producer but only has one writing credit to his name. The only other shows on his IMDB that I'm familiar with are "The X-Files" and "Boston Legal."

Most batshit crazy outfit:
It's a miracle that Lorelai makes it through winter without a single scarf accident. She is asking, no begging, for an Isadora Duncan situation.

I thought Rory's newsroom outfit was kind of cute until I saw the weird-ass belt buckle. I can't tell what is on it - a house in the suburbs? - but hate it nonetheless. The turtleneck can stay.

Most irritating Rory or Lorelai moment:
After they sleep together, Lorelai asks Jason what he thinks they should tell Richard and Emily. He wants to fess up and admit that they're dating, whereas Lorelai wants to "say nothing." Jason is uneasy about this plan but respects Lorelai's wishes.

Later, at Friday night dinner, Lorelai is outraged to hear that Jason took a woman named Crystal to a fibromyalgia function. Girl, you told him you wanted to keep the relationship secret! Also, I don't recall there being any discussion of exclusivity. Imagine how exhausting it would be to date Lorelai (or any of the Gilmores). After she admits she's treating him poorly because she's upset about Crystal, they talk and come to an agreement about how to handle similar situations in the future. It all works out in the end but damn, Lorelai is a shitty communicator.

Number of times Rory or Lorelai treat their bff like shit:
I'm not saying Tobin is a child molestor, but I don't like the cut of his jib. If Lorelai were a good friend, she would have warned Sookie not to leave her baby alone with Mr. Crazy Eyes. At the very least, I bet he's capable of murder.

Rory doesn't have many interactions with Lane (who is busy being super waitress at Luke's) but she does unskillfully lie for Paris when she slips away from the Daily News to suck Asher's talcum powder dick.

Best literary or pop culture references:
In the opening Friday night dinner scene, Lorelai learns a shocking grammar fact and feels the need to drag poor Mariah Carey into it:

Lorelai: So everyone in the entire world knew the plural of cul-de-sac was culs-de-sac?
Richard: Yes.
Lorelai: Okay. So Mariah Carey is out with some friends and she's had a couple cocktails, she glances down from the roof and says, "Oh, look at all those culs-de-sac."
Rory: Why are they on the roof?
Lorelai: It's a rooftop bar.

Lorelai spends the next morning making other words adhere to the culs-de-sac rule (yos-yo and pans-cake) and driving Rory crazy.

Sharpest insult or one-liner:
Good on Michel for defending himself and upholding important "Happy Days" facts:

Lorelai: Fonzie used the bathroom as his office.
Sookie: Yeah, what are you saying, that what's good enough for the Fonz isn't good enough for you?
Lorelai: Yeah.
Michel: Fonzie used that bathroom office only intermittently and not for any business for which he was paid. He had use of a private office at the auto shop he worked at, then access to the teachers' lounge where he taught night school part time.

Who's the pop culture queen now, Lorelai? You've been dethroned.

Books mentioned/books Rory is reading:
We don't see anyone reading but Jason reveals that his guest room has a pretty nice selection of books, from "Wuthering Heights" to "Valley of the Dolls." While not specifically mentioned, I am further impressed by "The Art Book," another selection that is visible on his shelf. Say what you will about Digger, but the man has good taste.

Best song of the episode:
Nothing but the sound of those sweet, sweet la-las.

Thoughts:
After seeing Paris and Asher sucking face after the Harvard-Yale game, Rory is in shock and denial. I guess she must be on fall break because Lorelai asks what all the roommates are up and mentions that "classes don't start for a couple of days." Rory mentions that Paris is "skiing with her boyfriend" and Lorelai asks how their relationship is going. Rory gives a weird response with about 5 too many "ums" but Lorelai doesn't seem to notice. I'm surprised that Rory didn't immediately tell Lorelai about the illicit makeout sesh. Maybe she actually does have some loyalty to Paris and feels weird ratting her out? What's even more likely is that Rory is so scandalized, she has decided to pretend the whole thing never happened.

Post-dinner with the grandparents, Rory heads back to campus to "get a jump on things" and realizes that Paris has made the same decision. Their dorm suite conversation is incredibly awkward; I feel bad for the old, nostalgic janitor who has to witness it. Instead of sticking around for more uncomfortable pleasantries, Rory heads back home and spills her guts to Lorelai. Cue approximately 2039283 jokes about wrinkly penises. Just kidding - there somehow isn't a single wrinkly penis joke. There is one about Woody Allen, though.

Later, all of the new staffers are initiated at the Yale Daily News. They're forced to make newspaper hats and run around doing menial tasks for the older students ... a bit of light hazing. Paris, master crafter, makes a beautiful hat that would bring a tear to Terrence's eye. Everything is going fine until Paris receives a booty call and unexpectedly bounces. None of the new staffers are supposed to leave and when Doyle notices her absence, Rory cobbles together some marginally believable story about a sick aunt.

When Paris finally returns, it's the middle of the night and Rory is sleeping. She fumbles around loudly, gleefully babbling about how late it is, practically begging Rory to take an interest in her night. After Rory tells Paris that she isn't interested and prefers to stay ignorant forever, Paris pauses for a beat and happily reveals, "I smell like pipe tobacco." 🤭

At the end of the episode, Rory realizes that Fleming is the professor of her contemporary political fiction class. He saunters up to her and basically explains to the entire class how nepotism works:

Professor Fleming: You're taking this class?
Rory: Yes, I am.
Professor Fleming: Wonderful. I look forward to it. After all, it seems very natural, doesn't it? Especially since you and I have someone very important in common, hm? Your grandfather. Good man.
Rory: Yes, sir. Very good.

Someone should fire this assclown ASAP.

Lorelai splits her time between friend drama and Jason sex. Michel is flabbergasted to find Tobin at a Dragonfly Inn meeting and doesn't even try to hide his irritation. Not only is Tobin Davey's temporary nanny, he's also Sookie's shopping buddy. Unlike Michel, he's friendly, loves children, and eats pizzelles. I understand why these two don't get along. They're both nightmares but in totally opposite ways.

Since Michel feels threatened, he does something unconscionable in an attempt to compete with Tobin: offers to babysit Davey (who he thinks is named Truman). After Michel accidentally rolls him under the bed during a game of baby crepe, he calls Lorelai in a panic. She assists, talks him down off the ledge, and reminds him, "We love you, Michel, and as long as you stay far, far away from little Davey, we will continue loving you." It's all fine for a C-story but not incredibly interesting.

I know I'm in the minority here, but I thoroughly enjoy watching Lorelai and Jason's relationship progress. He finds her annoying traits charming (like talking during a movie) and she tolerates his pedantry. After a few glasses of wine and an overview of Cyrus the dog's best tricks, these two weirdos go to Bonetown. Jason must be good in the sack because Lorelai tells him "I'm gonna fall asleep extremely happy tonight." Unfortunately, that happiness fades as soon as Jason asks her to sleep in the guest room. Personally, I would be fucking stoked about this request. Good sex followed by sleep that's not interrupted by someone else's breathing? Sign me up!

Lorelai is understandably skeptical and initially seems to think that Jason is just trying to get rid of her. After he begs her to stay, explains his chronic insomnia, and shows her the dope guest room, she's more at ease. I don't currently have a TV in my bedroom because I know it's bad for you and blah, blah, blah, but after watching this episode, I have convinced myself that I need one. My favorite thing about sleeping in hotels is watching TV in bed. It feels so decadent! Lorelai's smile as she sinks into the pillows and cuddles up with Jon Stewart is something I need in my life.

The next morning, over eggs, toast, and bacon, Lorelai and Jason discuss how to break the dating news to the Gilmores. Lorelai wants to say nothing whereas Jason feels it's best to come clean. She wins him over by declaring "We will tell them eventually, I promise, just not now." Of course, she becomes immediately irritated and pouty when she learns about Jason's date with Crystal at Friday night dinner. During an impromptu visit to the inn, Jason reminds her of their conversation and reiterates his desire to tell her parents. After yet another discussion, Lorelai confirms she still wants to keep things on the d/l and that it's fine if Jason takes Crystal to work functions. This is going to end well! 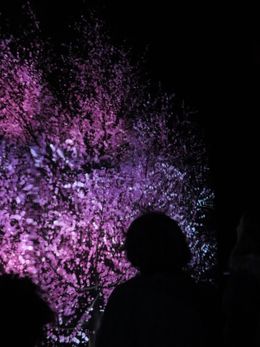 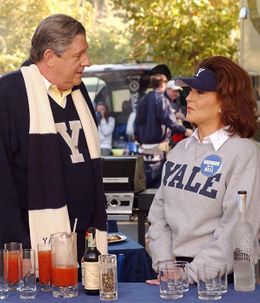