Directing and writing credits:
"Ballrooms and Biscotti" is written and directed by Amy Sherman-Palladino. I don't have any crazy ASP news, but I am excited that "The Marvelous Mrs. Maisel" is coming back on December 5.

Most batshit crazy outfit:
Lorelai is the type of person who goes to another country, adopts all of the stereotypes of the culture, and doesn't give a single fuck that she looks like a moronic, out of touch American. As a teenager, I would have been super embarrassed by this behavior, but I guess Rory is used to it by now.

Most irritating Rory or Lorelai moment:
Instead of telling Emily that Lorelai can't attend Friday night dinner because of the Yale start date debacle, Rory says nothing and lets her believe it's a snub. I guess maybe she doesn't tell her because she isn't in the mood for criticism about her mistake, but it's still baffling. When Emily levels up her passive aggressiveness by making soufflés and mandating ballrooms dancing marathons, Rory calls Lorelai and whines that she's being held captive. She's 18 years old! Why can't she use her words and tell her grandma that she needs to leave so that she can pack for Yale? Grow a spine, Rory.

Number of times Rory or Lorelai treat their bff like shit:
Lane isn't in this episode, but we do see Sookie. She and Lorelai discuss her pregnancy and Luke's weird, post-vacation attitude. I must give Lorelai props for refraining from smacking Jackson in the face during his speech about how much he misses the year 1954. Had I been in her position, I don't think I would have been able to control my rage.

Best literary or pop culture references:
After Rory tells Taylor she doesn't have time to be the "Ice Cream Queen" this year, he lays the guilt on thick and compares her to Barbara Bush:

"No, I understand. You're no longer our little Stars Hollow Rory Gilmore. You belong to the Ivy Leagues right now. It's time to cut those small-town ties and go off and do something important like go to drama school or have one of those high-class naked parties with that Bush girl."

Honestly, Rory would benefit tremendously from doing something mildly adventurous, like attending a naked party with Barbara Bush.

Stars Hollow weirdness:
Taylor's Soda Shoppe opens, and it is truly horrific. The employees look like a cannibal barbershop quartet, and the decor heavily features Taylor - on a clock, a life-size cardboard cut-out, and the menu. The ice cream assembly instructions are undeniably sexual, too:

"Scoop toward you, rolling smoothly. Very good, Ginger. Nice symmetrical balls there, Joshua. Easy on the nuts, easy on the nuts. One cherry, and then present your sundae with a Taylor Tip."

I mean ... ASP knew what she was doing when she wrote this scene.

Babette and Kirk also add to the townie insanity. When Rory and Lorelai fail to arrive home on time, Babette freaks out and starts calling consulates. As soon as they finally do show up, she bombards them with conversation and hot cocoa, totally missing all social cues to scram. Kirk's feelings are hurt when he is the only one who doesn't receive a gift from the Gilmores, which is understandable. Since he's a glutton for punishment, he volunteers to skydive during the grand opening of Taylor's store. To no one's surprise, it ends poorly ("strong wind").

Sharpest insult or one-liner:
Alexis Bledel's line delivery is great during this exchange:

Richard: Well, who did you look up when you went to Europe?
Rory: Jim Morrison says hello.

It perfectly conveys that she's sorry they fucked up, but aware that they're adorable and can get away with almost anything.

Books mentioned/books Rory is reading:
Nada in this episode, but there were a bunch of movie references. Maybe I should add a section for those?

Best song of the episode:
I thoroughly enjoy the string version (by Fantastic Strings) of "The Girl from Ipanema" that plays in the beauty supply. It's the type of thing I imagine listening to while sitting poolside at a resort in my alternative life.

Thoughts:
After returning from Europe later than planned, the Gilmores are accosted by Babette as soon as they set foot on their front lawn. After they missed their initial arrival date, she panicked and convinced herself they had been "kidnapped by some crazy Sandinistas or something." Sometimes I think it would be nice to live in a town like Stars Hollow, but then I remember how much I would hate having a neighbor like Babette. To their credit, Rory and Lorelai do a good job of politely telling her to get lost.

The next day, the marginally jet-lagged Gilmores discuss their plans for the week leading up to Rory's Yale orientation. Here is the itinerary:

It's a legitimate shame that this dope week doesn't get to happen. When Rory finally opens her mail, she realizes that she wrote down the wrong start date for Harvard and that it's actually this Saturday, not a random Wednesday (duh). She and Lorelai are distraught, but still determined to accomplish all of the major items on their list.

They managed to distribute all of their presents pre-revelation, so at least they've accomplished one of their tasks. During this peregrination through the town, they discover that Luke is pissed at Taylor because he put a window between the soda shoppe and diner. Now Luke, his landlord and nemesis, can see his everything that goes on over there and is probably going to need to talk to his doctor about heart medication. The most grating part of this scene is when Taylor freaks out after Luke sticks his hand in a barrel of WRAPPED candy. Find something legitimate to get angry about, dude.

Here is a conversation I had with my husband after he first saw Taylor's soda shoppe outfit:

Husband: He's like a candy cane manatee.
Me: Why a manatee?
Husband: Look at his habitus.

The other major Taylor annoyance is that without her awareness or permission, he has anointed Rory the Ice Cream Queen. After she sees a poorly Photoshopped image of herself on a poster outside of the market, she confronts Taylor and tells him she doesn't have time this year to participate in his shenanigans. Instead of accepting this like an adult, he shames her by suggesting that Yale has turned her into a snob. Later, she discusses this event with Lorelai and worries,

"I mean, I've always had time for the town in the past, and now suddenly I don't? Am I changing? I don't wanna change. I don't wanna be the anti-town girl. I'm not Daria."

Taylor is such a petty, manipulative dirtbag and I don't understand why the town hasn't joined forces and murdered him yet. Michael Winters is a treasure, but Taylor is too rage-inducing to be an enjoyable character. He's like the Hannah Horvath of Stars Hollow.

Another person who should be immediately executed is Jackson. When Rory and Lorelai go to deliver Sookie's present, this dingus stands by and shouts dumb things like, "Hey, don't squish baby," when anyone hugs Sookie too hard. Did he flunk out of high school? Has he been eating the fertilizer instead of giving it to the plants? Nothing he does makes sense and there is clearly some kind of brain parasite or undiagnosed disability at play. He doesn't want to know the sex of his baby, which is fine, but what the hell is the point of the buttons? Who does he think is going to accidentally tell him? Sookie and Lorelai are the only ones aware that there is a shed out back stuffed with blue baby garbage.

Rory, who finds childbirth sickening, encourages this madness by donning a pin of her own. This exchange is the most rage-inducing:

While in the baby shed, Sookie and Lorelai discuss Luke. Sookie speculates that "something happened on that trip of his" and Lorelai wonders if he and Nicole had a fight. In reality, he and Nicole accidentally got married, and are in the process of planning a divorce. Luke is embarrassed about the entire ordeal and doesn't want to discuss it. I want to give whoever thought of this storyline a swift kick to the shins. Luke is not the type of character who gets swept up in the throes of passion and marries someone on a whim. Ross and Rachel? Sure. Charlotte and Trey? Okay. Luke and Nicole? No.

On Friday, Lorelai and Rory rush through their errands at warp speed. They realize that they'll never get everything done unless they split up, so Rory goes to the stationery store and Lorelai grabs her moisturizer (Kirk recommends products from Benefit and Clinique). There's a bit of nonsense where Lorelai decides to give Luke fake jam (fruits de la terre) since they forgot to get him a present in Europe. It's clear that Luke has a boner for Lorelai because he seems to find this charming instead of irritating as fuck.

At some point, the girls realize that they can't complete their to-do list if they both attend Friday night dinner, so Lorelai decides to bail. Technically, Rory's deal with the grandparents only guarantees her presence, so it shouldn't be a big deal if Lorelai is missing. Did these two morons smoke so much hash in Amsterdam that they forgot who they were dealing with? Emily Gilmore may not have specifically mandated Lorelai's presence, but she damn well expects it.

When Rory shows up to dinner solo and tells Emily that Lorelai is missing because, "she just had some things to do," the news does not go over well. Instead of explaining the Yale debacle, Rory lets her grandmother fly into a silent rage and subject her to a post-dinner soufflé and ballroom dancing marathon. If Lorelai doesn't want to make an appearance, Emily will hold Rory hostage. If Rory had a backbone or an ounce of common sense, she would explain the situation to her grandmother and leave, but because Rory is a wimp, she calls Lorelai and lets her handle the confrontation. Emily is a petty person, but this is a really dumb conflict, even by "GG" standards.

When Lorelai finally shows up, there are a few semi-tense moments, but the tension is diffused after the girls dissolve into a fit of giggles over the Mambo Kings and Jimmy Carter. Emily falls asleep on the couch, biscotti is consumed, and Rory hopes that Yale is "everything I've been imagining it to be." 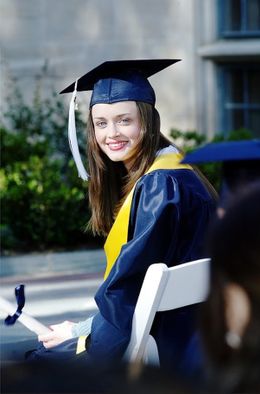