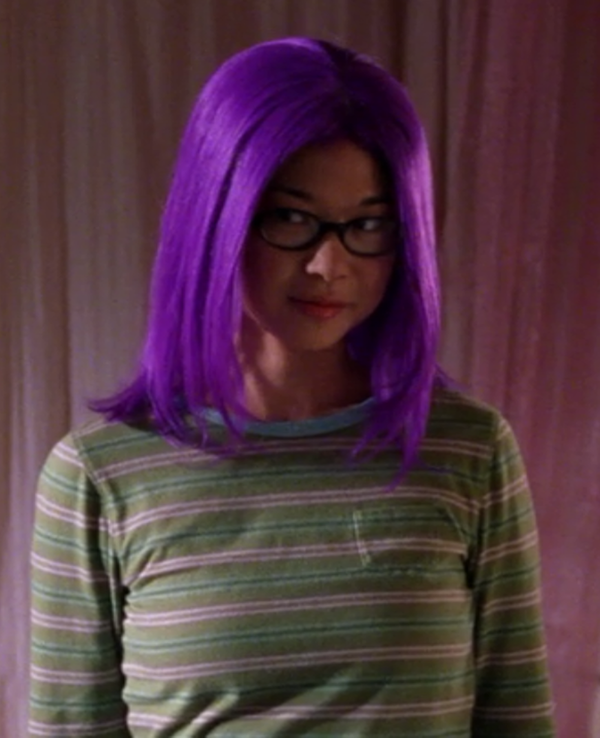 Directing and writing credits:
Directed by Steven Robman, written by Daniel Palladino. Robman also directed "Teach Me Tonight," the one where Kirk debuts his film, Rory breaks her arm, Lorelai loses her shit, and Christopher appears just to annoy us.

Two Daniel Palladino episodes in a row is kind of torture and this one has some especially problematic timeline aspects, which we'll discuss later.

Most batshit crazy outfit:
Lorelai is a style maven compared to this gaggle of identical, blonde nightmares: 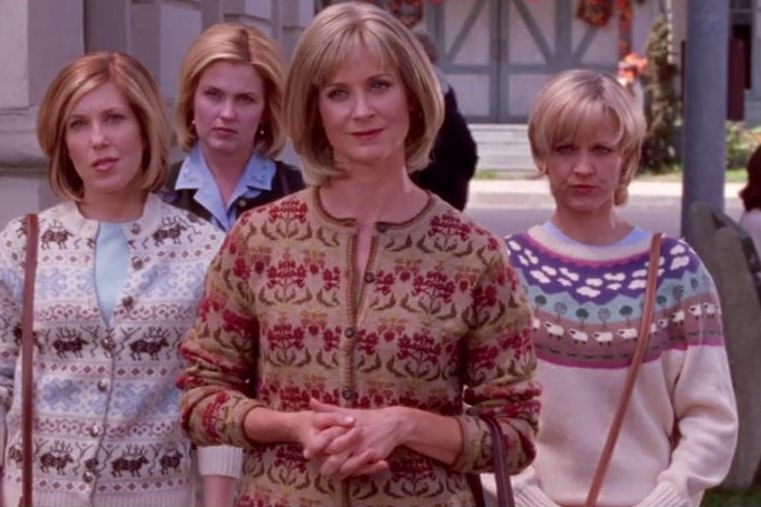 Where does someone even buy a sweater that ugly? The one with the sheep is kind of cool in a hipster/twee way, but all of the others are Talbots bargain bin rejects.

Most irritating Rory or Lorelai moment:
Didn't Rory do any research about how to dye hair before glopping a bunch of bleach onto Lane's head? I have so many issues with this scene that I can only imagine how annoying it is to a licensed beauty professional. Rory doesn't even bother to divide Lane's hair into sections, she basically just starts dumping bleach onto it and swirling it around for good measure.

There's no way Lane's jet black hair would have lightened to yellow blonde in one session. I bet it would have taken at least two or three. And then to go from purple back to black all in one day? Blasphemy! There aren't enough hours in the day + Lane's hair would have started to break off in chunks.

For some reason, Rory holds all inanimate objects like a child with a broken wrist and doesn't seem to have full control over her hands. Watch the way she applies bleach to Lane's hair. What the hell is going on there? 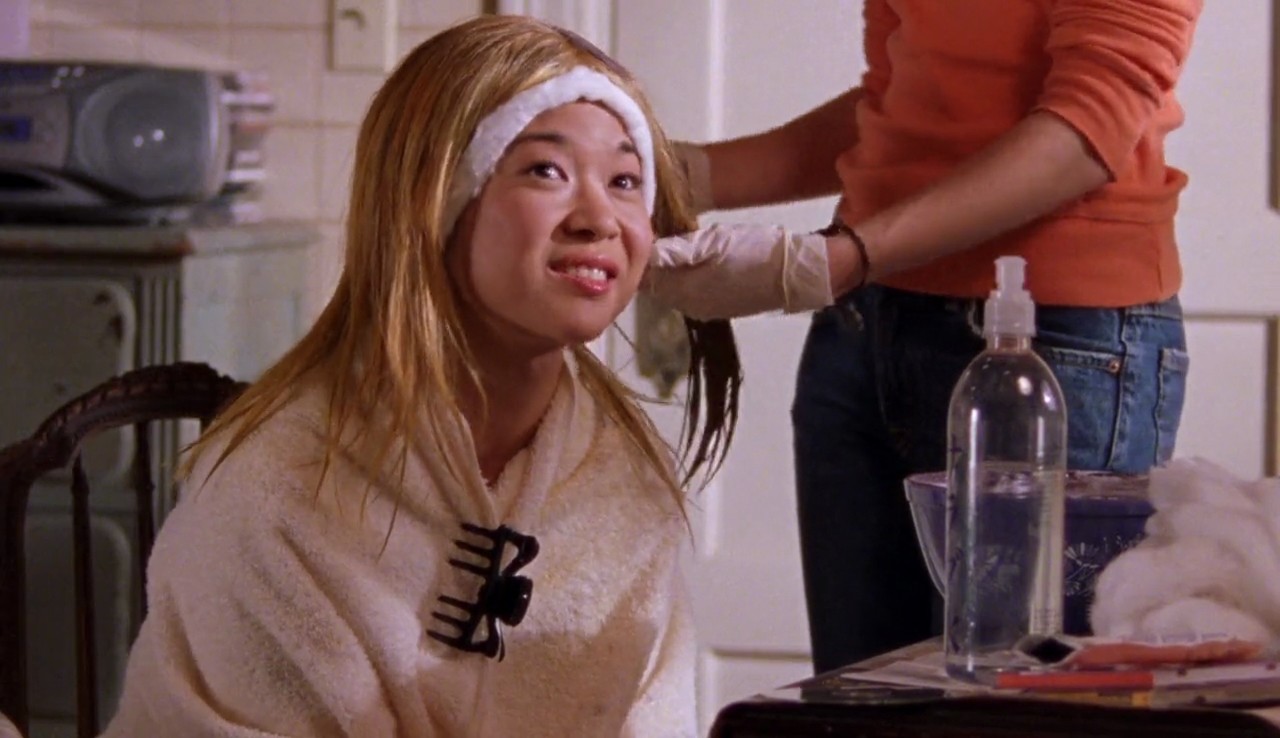 They should have found better wigs for this episode. Both are horrendous.

Number of times Rory or Lorelai treat their bff like shit:
Aside from the aforementioned hair disaster, Rory is a decent friend to Lane. She supports her hair emancipation and subsequent freakout, willingly turns down her Cornershop in deference to Lane's soul, and tries to help her figure out a solution to her band practice problem.

Sookie is MIA. She's probably off fucking Jackson (gotta have eight in eight), baking an insane wedding cake for fun, or buying more dead animals for her "manly" house.

If this episode took place in 2018, Rory would have pulled up Vin Diesel's Wikipedia page and rattled off some facts in order to distract Lane from her bleach burn.

"Once, a guy in our town named Kirk was practicing Bohemian Rhapsody with his band, the Kirk Gleason Five, and my mom shut them down so fast that the band fled without their instruments and never came back for them. To this day, Kirk can’t listen to Queen without tearing up."

And of course, there's the whole conservative Stars Hollow mom gang to discuss, but we'll get into that later.

Sharpest insult or one-liner:
Luke isn't happy to find his track picture on display at Stars Hollow High. When he sees it, he has this exchange with Lorelai: 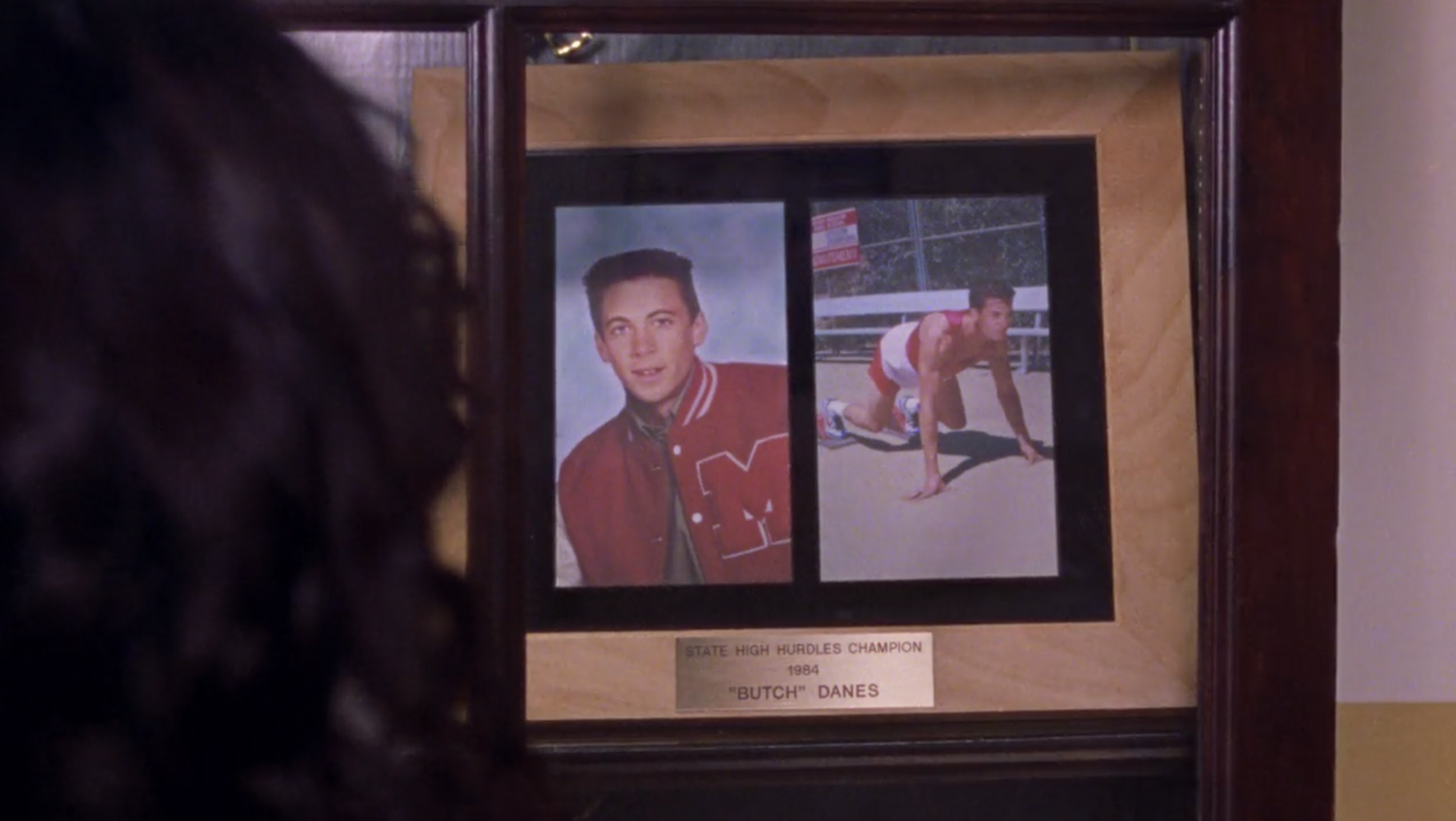 Isn't it hilarious that Lorelai thinks she has the authority to criticize what someone else is wearing? Luke's tank top and shorts are a uniform, her ill-fitting suit is a deliberately chosen outfit. If anyone deserves to be mocked, it's the woman with the bright red, patent leather snakeskin heels and ruffled trumpet skirt.

Books mentioned/books Rory is reading:
"Forty Days" by Bob Simon can be seen on Luke's bookshelf whenever Lorelai mocks him for his Parrothead shirt. When Luke returns from SHH, Jess is reading "We Owe You Nothing: Punk Planet: The Collected Interviews."

Best song of the episode:
"Cities in Dust" by Siouxsie and the Banshees is the clear winner. In 1992, Siouxsie talked to Melody Maker about this song:

"This was our first trip to Pompeii, another amazing experience. Seeing a whole civilisation petrified in lava, was like putting yourself in the place at the time, and imagining how it must have been to be there when it happened. I find it really easy to do that, to get ghost images of life continuing as it was. I often wonder if that’s what real hauntings are – your imagination and your senses bringing things back to life. That’s why you’d never be able to capture it on film." 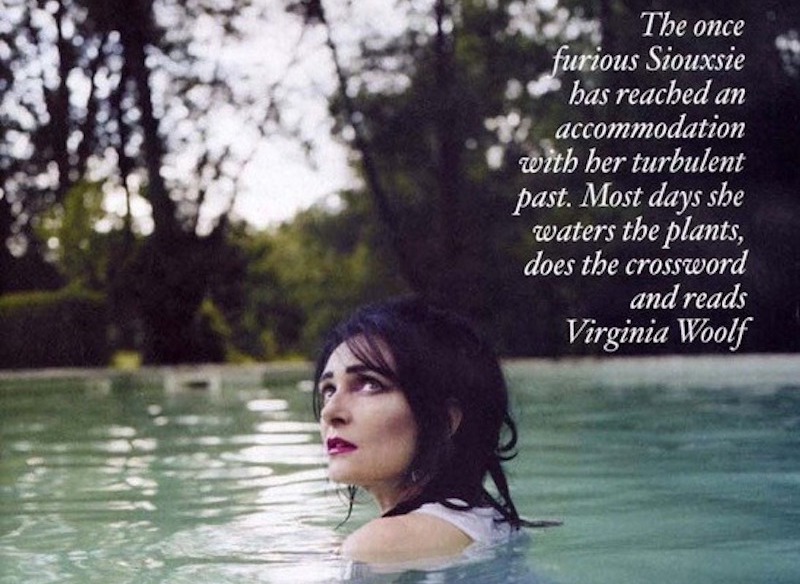 Thoughts:
Lane's band is pissed off because their current practice space, Sophie's Music, requires them to play "London Calling" at library volume. Everyone is all "let's just rent out a practice space in Hartford," because apparently these high school students with no part-time jobs are flush with cash. Lane knows there's no way she'll be able to convince her mom to let her do this/find a suitable lie for her absence, so she decides to dye her hair purple in an act of "go fuck yourself, mom" defiance.

While Rory applies the dye with the skill of a 100-year-old arthritic woman, Lane confesses that she's in love with Dave. Maybe the writers knew that they only had Adam Brody for a limited number of episodes, but I resent that the Lane/Dave romance moves so quickly. If Dave smiled at me one time, I'd probably be in love with him, too, so I guess I'll give Lane a free pass.

As Lane rambles on about how great Dave is, she seems to realize that she's unfairly comparing her crush to Rory and Dean's epic romance (lol). The two have this conversation:

Lane: I finally have a first love, like what you and Dean have.
Rory: Right ... exactly.
Lane: Of course, I don’t exactly have what you and Dean have because you love Dean and Dean loves you back. In my situation, I love Dave and Dave thinks that I have a decent sense of rhythm.
Rory: Don’t move, you’ll drip.
Lane: God, you’re so lucky – to love a guy who actually knows you love him and who loves you back. That’s gotta be the best feeling ever.
Rory: I think this purple’s gonna look good.
Lane: I want that. I want that really bad.
Rory: You’ll have that. You will have your perfect first love and second love and any other love you want because you’re great and purple heads will not be denied.
Lane: Now that should’ve been put on the box.

I know Lane leads a pretty puritanical existence, but it makes me deeply sad to think that Rory and Dean are her #relationshipgoals.

After this conversation and Lane's eventual freak-out, Rory goes back to Stars Hollow Beauty to buy black hair dye. When she walks in, Shane is on the phone with Jess and Rory tears her a new one. I understand Rory's desire to be mean to Shane and I don't have a problem with it as long as there's no slut-shaming, which there isn't in this instance (but don't worry, it comes later). 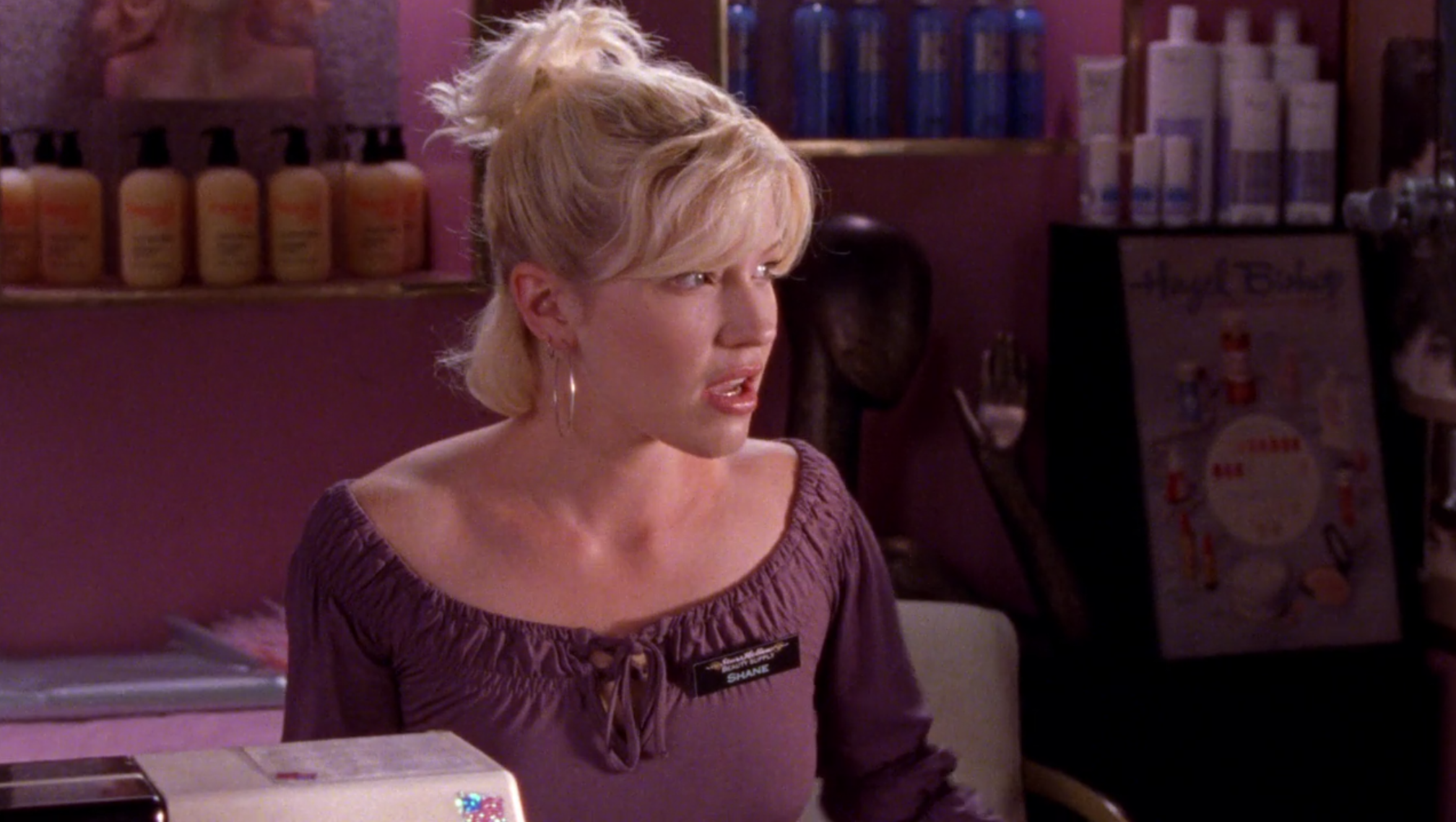 "The level of service in this place is just that – un-freaking-believable."

While Rory is busy irreperably damaging Lane's hair, Luke and Lorelai are getting ready for the PTA business success Q&A. I truly don't understand how anyone in the writer's room failed to catch all of the timeline inconsistencies in this episode. I guess we're supposed to assume that the talk at SHH takes place after school because otherwise, there's nothing to explain why Rory and Lane are free. In one scene, Rory and Lane interact with Shane at the Beauty Supply store; in the next scene, Lorelai tells Luke that Jess has a girl in the closet. Later, Jess confirms that this girl was Shane. Does Shane have the ability to teleport? Did Kirk come to relieve her for a long break at the shop? It makes no sense.

When Rory and Lane get to the Kim household, they're both wearing different outfits. Maybe they both changed to avoid getting dye on their clothes. BUT WHEN RORY GOES BACK TO THE STORE AND SEES SHANE FOR THE SECOND TIME, SHE IS ALSO WEARING A NEW OUTFIT. This shit drives me bananas. Is this day actually two days? Does time not exist in Stars Hollow? I want an explanation, dammit.

These are Rory and Lane's original, post-school outfits.

The after-school talk is about as weird as you would expect. Lorelai makes a weak effort to talk about her business success, but kids keep bombarding her with questions about her teen pregnancy. Instead of intervening, Debbie Fincher, aka Susan from "Seinfeld," silently sits in the corner. These kids don't even ask Lorelai anything practical, like "Did you use a condom when you got pregnant with Rory?" They ask her philosophical shit like, "Are you sorry you got pregnant?" Maybe Lorelai thought she was being helpful/informative, but I don't understand why she didn't say something like "I'm happy to answer any questions you might have about sex education after this event, but right now I really need to stay on topic."

I'm also perplexed by the conservative mom group that ambushes Lorelai. If the talk was so "awkward and unnecessary," why didn't DEB do something about it? She acts like she was completely powerless in the situation. And although Lorelai is the last person I'd want teaching a sex education class, I don't think she said anything even remotely controversial. She spoke from personal experience, gave no salacious details, and certainly didn't advocate for teen pregnancy.

Sometimes I think it would be nice to live in a small town like Stars Hollow, but then I remember that places like that are always full of Debbie Finchers. Gag. No, thanks.