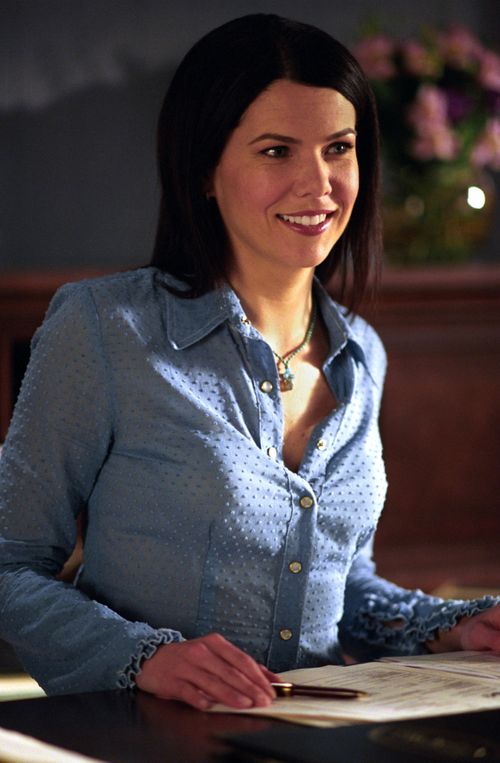 Directing and writing credits:
Directed by Kevin Dowling, written by Linda Loiselle Guzik. This is Dowling's only episode of "GG" but he's directed a bunch of random things over the years, like "Joan of Arcadia," "One Tree Hill," and "The Americans." He also directed "Mojave Moon" a really horrible, piece of shit made-for-tv movie with Danny Aiello and Angelina Jolie. I watched it once when I was home sick with the flu in high school and immediately regretted it.

You should remember Guzik from "Emily in Wonderland" and "Secrets and Loans," two episodes I didn't like very much. This is her last writing credit of the series, but she'll finish out as a story editor until the final episode.

Most batshit crazy outfit:
The outfits are pretty decent this episode. I think the most offensive is Rory's plaid, shruken cardigan, and flared cords with multiple buttons at the fly. The cardigan is so short - it comes right to her waistline - and it gaps at the bottom which clearly indicates that it's too small for full-buttoning. 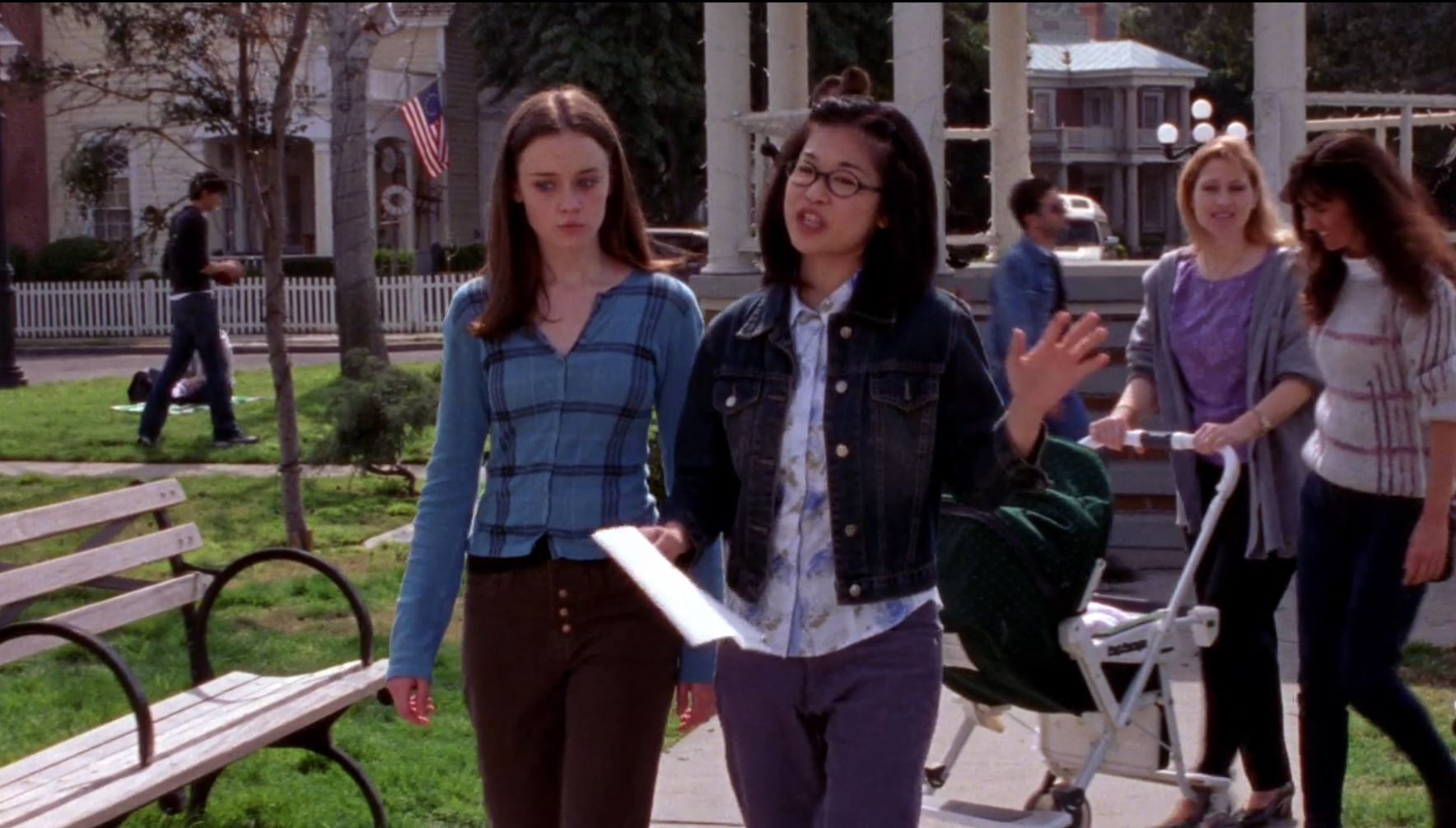 All things considered, this is tame. It doesn't hold a handle to Lorelai's dog shirts.

My husband also said this about Michel's 3-button suit: "Oh, he's going to regret that. He looks like an NBA mortician."

Most irritating Rory or Lorelai moment:
I hate when Lorelai gets involved in Rory's love life. When Dean shows up at their house unannounced and starts washing Rory's car, Lorelai pulls him inside and gives him some advice. (She also refers to the hose as "the squirty water thing" which I don't find cute 🙄.)

Lorelai: Okay. First, I just wanna tell you I think you are a great guy. You’re so good to Rory. And even though I’d always hoped that she’d be the one girl in the world who wouldn’t look at a boy until she was thirty-eight, I’m really glad she found you.
Dean: Thanks.
Lorelai: And I know things have been a little off between you two lately.
Dean: Did she say that?
Lorelai: No, I’m saying that. I can see it, and by the way, I get it. But sometimes when things are out of whack, it freaks us out a little and makes us feel like we’re losing something that’s really important and that scares us even more so we try really hard to hold onto whatever it is we think we’re losing and sometimes we hold on a little too hard.

Dean doesn't just think he's losing Rory ... he actually is losing her and it's patently obvious to anyone with eyes and decent common sense.

Number of times Rory or Lorelai treat their bff like shit:
Lane and Sookie both suck, but Rory and Lorelai are supportive. Sookie is stressed because her wedding invitations have the wrong name (Susie Saint James) and Lorelai tries to stop her from committing a felony. Lane is distraught because her career test has shown that she has an aptitude for sales. Rory listens to her pathetic lamentations and reminds her that it's just a stupid test, not a correct predictor of the future.

Best literary or pop culture references:
Louise: I couldn’t find my new lip gloss this morning. I had just bought it and it’s the perfect shade of pink. Plus, it has this major shine with minor stickiness, meaning no fear of your hair attaching itself to your face when the wind kicks up.
Madeline: A coup.
Louise: I know. So, of course, fifteen minutes later, tardy and glossless, I left the house and I had to rely on Madeline for my source of lip color for the day. Not an ideal solution.
Madeline: Major skin tone mismatch.
Paris: I’m sorry, group leader, could you ask the Pigeon sisters if there is a point to this opus?

I haven't seen "The Odd Couple" in forever, but I remember loving the Pigeon sisters. 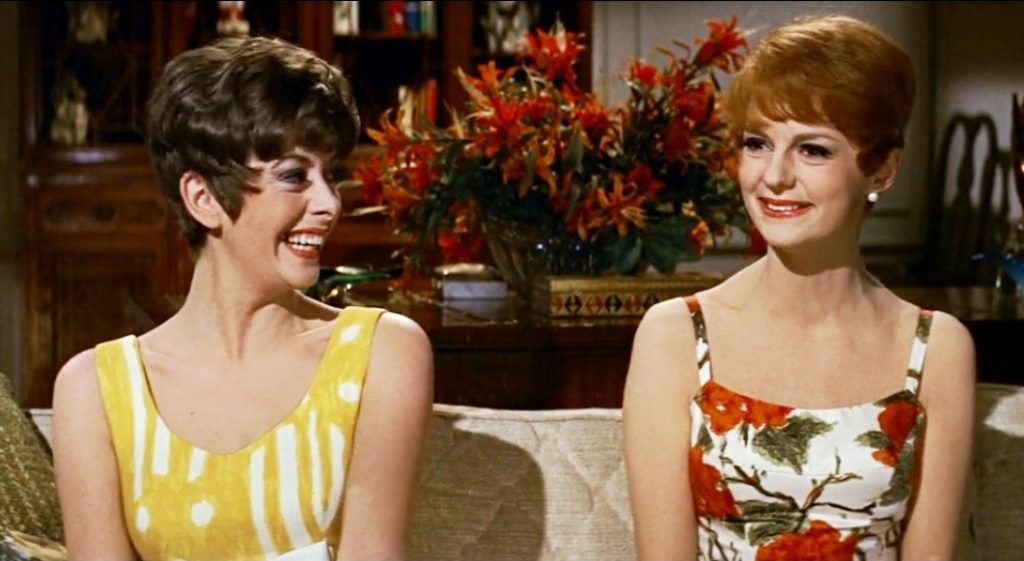 Stars Hollow weirdness:
This episode is light on townies, but Lorelai makes up for their absence. Luke's longstanding four-slice French toast special has been replaced with a new omelet, and Lorelai orders it just to fuck with him. It's equal parts funny and annoying. Luke tells Lorelai she won't like the omelet - three eggs with bits of bacon, cubed tomatoes, swiss cheese, and a dash of oregano - but she still insists on ordering it. Slowly, Lorelai modifies the order so that when all is said and done, she's left with a jack cheese omelet. If I were Luke, I would have flipped the table and banned Lorelai from the diner for life.

Sharpest insult or one-liner:
As Paris paces around the table during the Style Aid Corporation meeting, Brad asks, "She doesn’t have a baseball bat in her hands, does she?" He's referring to the scene from "The Untouchables" where Al Capone (Robert DeNiro) beats a disloyal employee to death with a baseball bat at a dinner party.

I'm surprised this reference is in Brad's repertoire. He seems like the type who only watches musical theater.

Books mentioned/books Rory is reading:
Rory finishes "Candide" and Lorelai is seen reading "The Dirt: Confessions of the World's Most Notorious Rock Band." 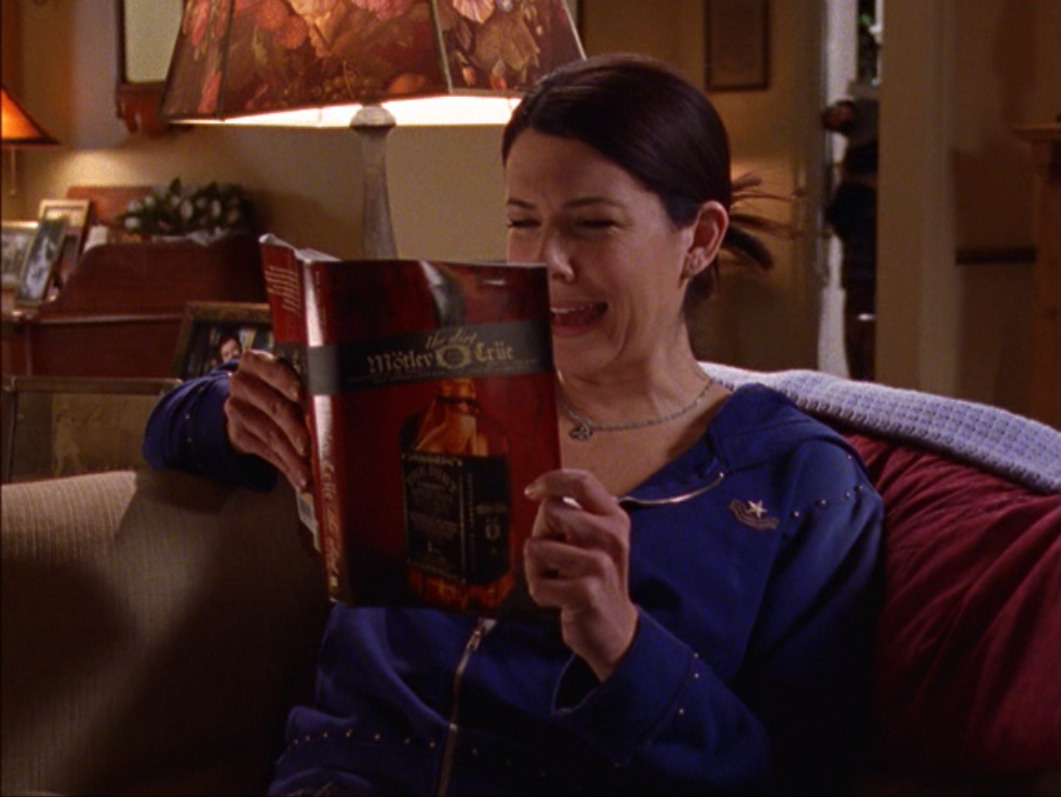 There are also mentions of Mark Twain, "The Adventures of Huckleberry Finn," "Waiting for Godot" and "The Bhagavad Gita." And once again, Jane Magazine gets a nod ... this time by Richard freakin' Gilmore.

Madeline: Okay, well, first we go for the obvious – magazines.
Louise: You know, Teen, Young Miss, Seventeen.
Madeline: Spin and Rolling Stone, especially to hit the guys.
Richard: I hear that Jane magazine also has a young, hip following.
Rory: How do you know about Jane magazine?
Richard: I have my ways, young lady.

Someone needs to tell me how much Jane magazine paid for this blatant product placement. This is at least the third mention this season.

Best song of the episode:
Nothing but la-las and the sound of Dean whining.

Thoughts:
This episode annoys me because I can't empathize at all with Richard Gilmore's white male struggles. You have a pension and are wealthy enough to comfortably retire at sixty with zero changes to your existing lifestyle? Bully for you! Join a masters swim league, travel the world, or start growing weed plants in your basement.

Seriously, though. Richard Gilmore fumbles hard in this episode and I find it embarrassing instead of endearing. I guess things were different for his generation. People his age expected to have the same job forever and had a sense of company loyalty that no longer exists in 2018. When Floyd Stiles nudged him out by slowly taking away responsibilities, Richard never even considered finding a new job. Had I been in his situation, I would have started sending out resumes before things even got mildly contentious (jk I would have retired and been fucking happy about it). Richard found it unthinkable to ever work for another company, whereas I anticipate working for at least 10+ companies over the course of my career. 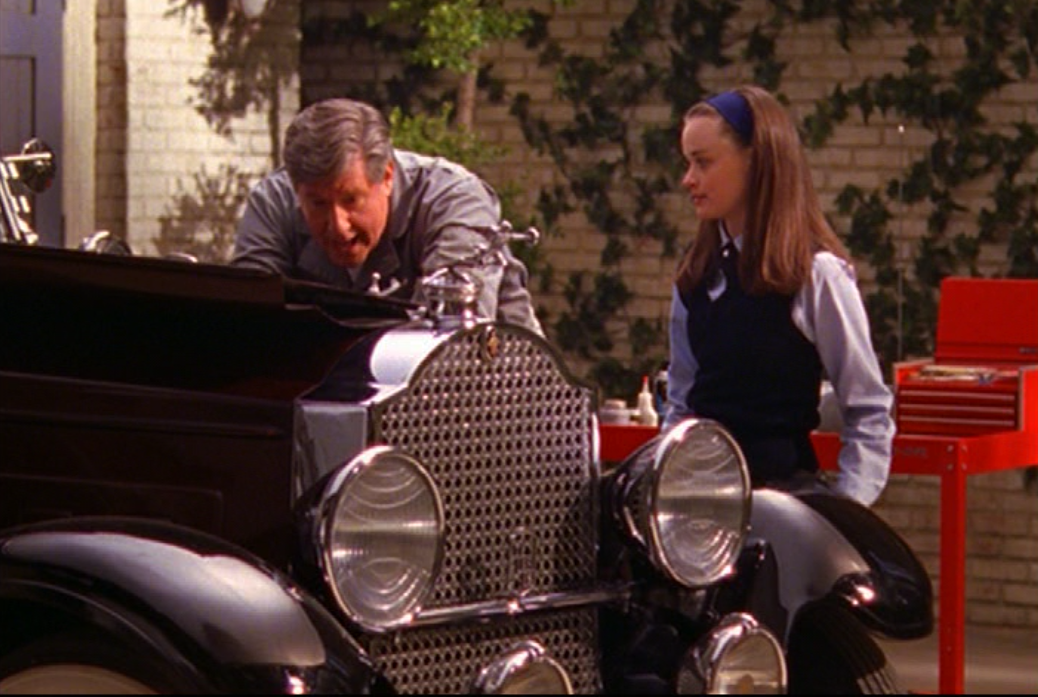 Had Richard been in therapy, he would have discovered much sooner that retirement isn't right for him. He would have a better handle on what brings him joy and satisfaction and instead of embarrassing himself at Rory's business fair, he could have worked on plans for his own company. It's too bad the Gilmores are all above therapy (until "AYitL," which is a separate discussion). It's pretty damning that even Headmaster Charleston, an acquantaince at best, tells Richard, "I just can’t picture you retired."

Richard isn't the only person to embarrass himself this episode. Dean, who has always been kind of pathetic, reaches a new low when he metaphorically lunges at Rory's legs and begs her not to leave. He shows up uninvited to breakfast, tells her to come to his softball game even if she needs to multitask with homework, and shows up at her house multiple times when she's not there. Get it together, Dean. I hate you, but you're better than this! After calling her fourteen times over the span of a few hours, I can't help but compare him to (a less fun) Trent from "Crazy Ex-Girlfriend." 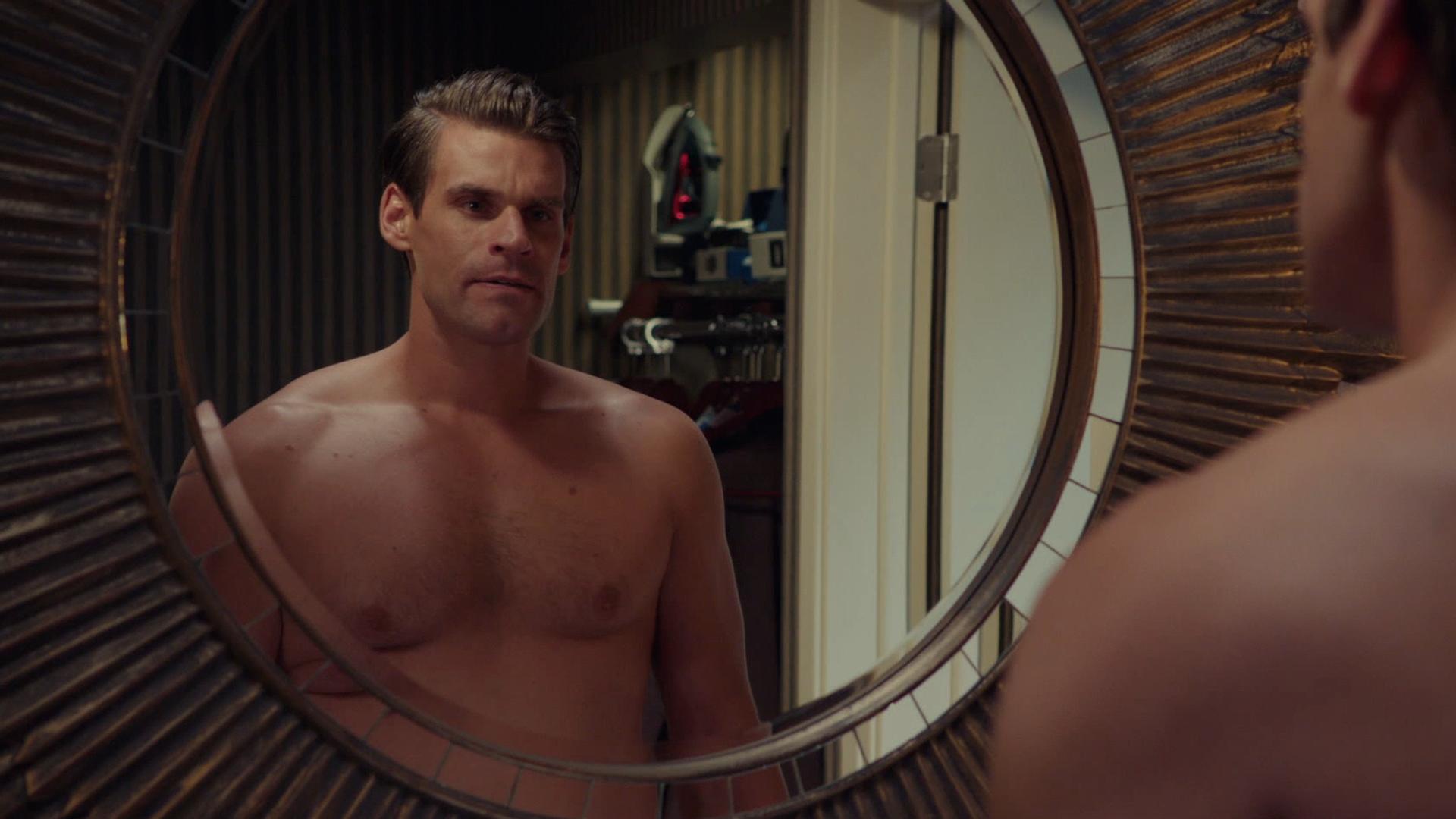 It's the Trent is getting ready song 🎶.

What Rory does to Dean is absolutely unacceptable, but I wish he'd develop a backbone and either break up with her or demand better treatment. Dean and Rory are both so passive that had Jess not thrown a wrench in things, they probably would have stayed together, in a totally boring and mediocre relationship, forever. 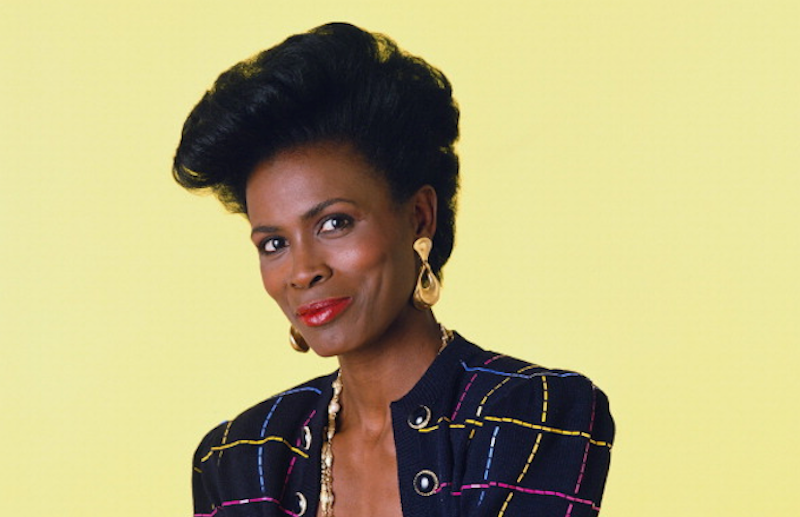 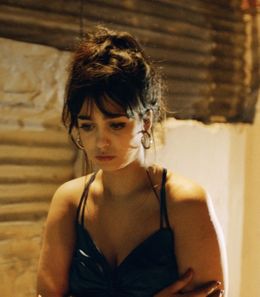 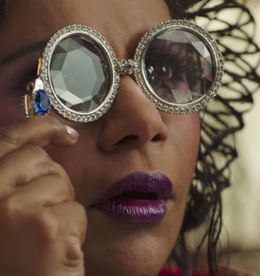