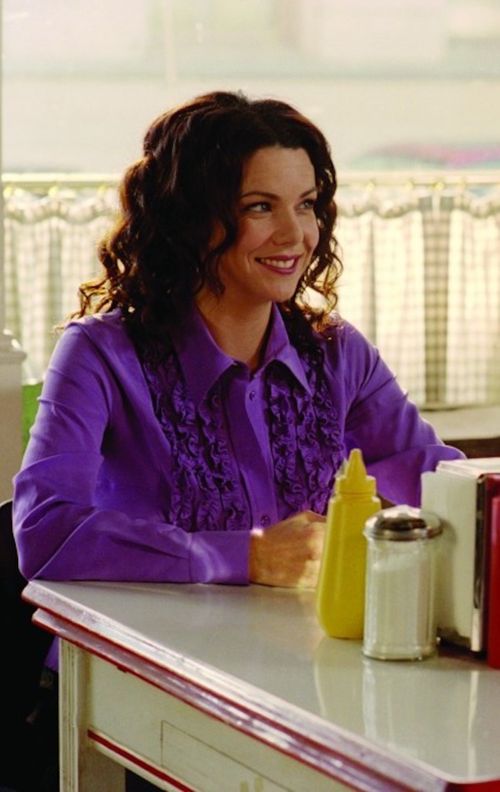 Directing and writing credits:
Directed by Steve Gomer, written by Frank Lombardi. Both of these guys are "GG" one-and-dones. Notable lines on Gomer's resume include episodes of "Veronica Mars" and "Joan of Arcadia." Did anyone else used to watch the latter show in the early 2000s? Meg was obsessed with it, too. I remember I let her borrow an episode my mom taped on VHS once. The premise was that Joan (Amber Tamblyn) could talk to Jesus, who would take the form of random people or animals, and give her tasks to complete. I don't really remember why I liked it, so I asked my mom, who in her late 50s somehow has a better memory than me. 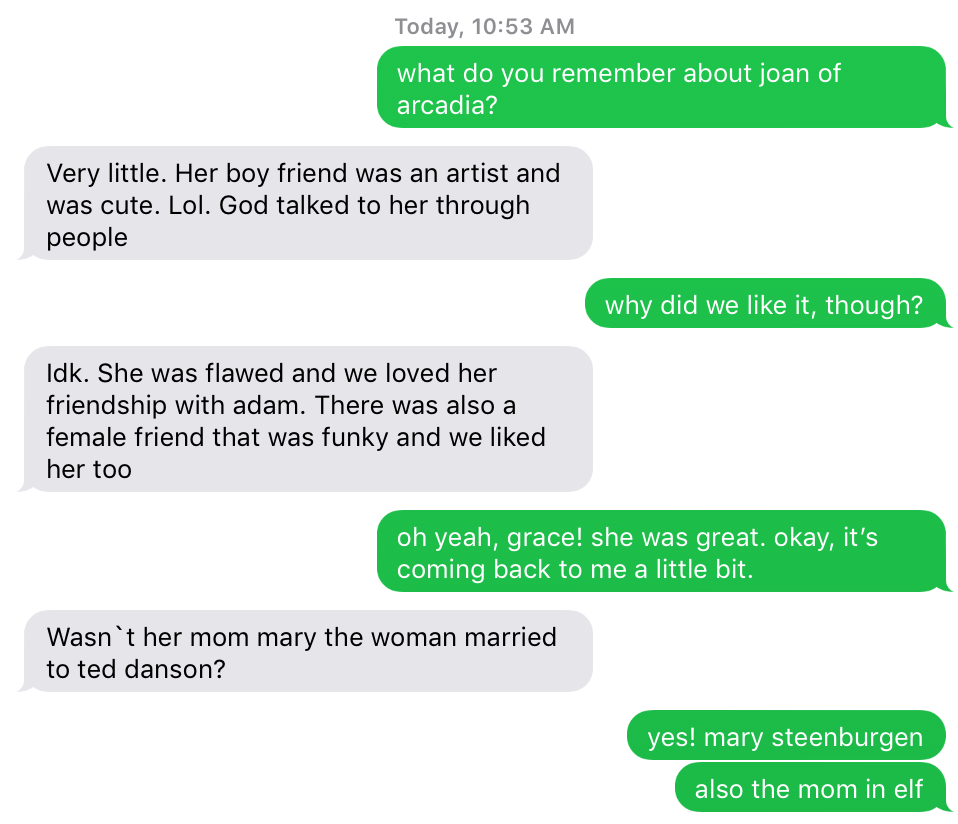 Don't judge my mom for her typos - she still has a flip phone. 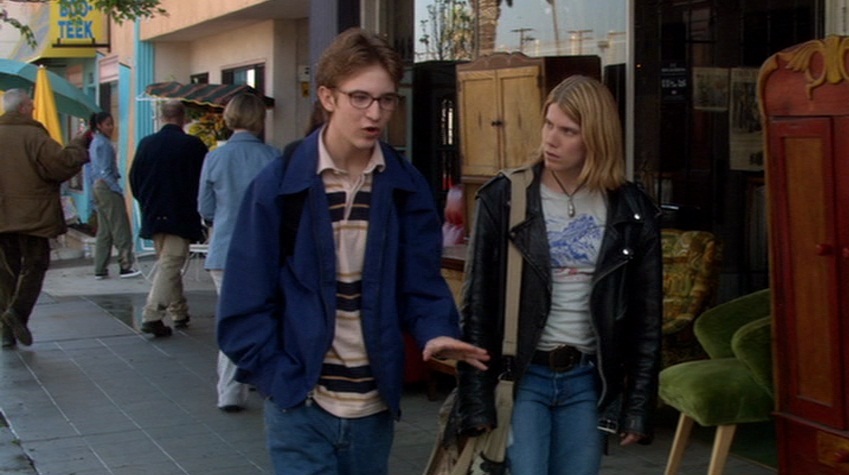 This is Grace and her badass leather jacket.

Lombardi also has some good shit on his resume. He was a writer/producer on "The Nanny," which tbh, kind of sounds like my dream job. He must be close with Fran Drescher, because he wrote/produced all of her shows. I googled "Frank Lombardi Fran Drescher" to see if I could find more details about their relationship, and this was the first result 💔.

Most batshit crazy outfit:
Lorelai's gross, ruffled purple shirt in the header image is pretty damn hideous. The material looks like a lightweight cotton, which seems inappropriate for weather that requires jackets and scarves. The sleeves are tight at the cuffs but floppy through the arms, and I think it's bizarre how the ruffles stop abrupty at the bottom of her tits. It's the type of shirt that should be worn tucked in or with a jacket, but Lorelai keeps it untucked and pairs it with a pair of black slacks with a subtle, metallic diamond stitching, and (I think) a small gold cross necklace. 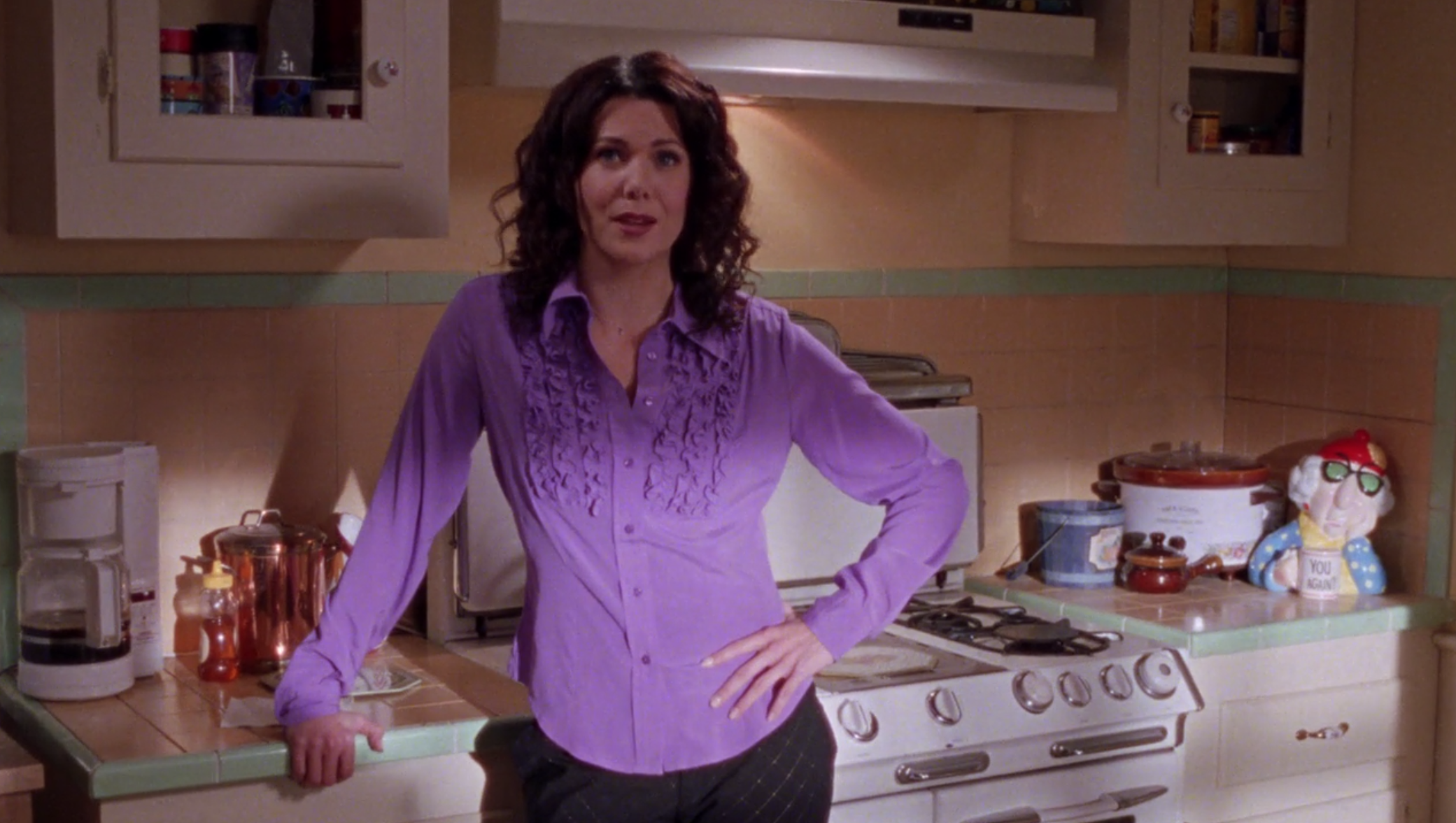 Please note the Maxine cookie jar in the background.

When Richard asks her where her "work jacket" is, maybe it's because he's shocked at the hideousness of her shirt and can't believe she would subject the Independence Inn clientele to something so tragic.

Most irritating Rory or Lorelai moment:
They really don't do anything too egregious in this episode. Lorelai is a brat about having to spend time alone with her dad, but after the day plays out, it's hard not to side with her.

Rory is a little ridiculous about that "Showgirls" tape, but I guess she's just trying to be responsible or something. Personally, I think she should let the children of Stars Hollow have their fun.

Number of times Rory or Lorelai treat their bff like shit:
None, but only because Sookie and Lane aren't in this episode.

Best literary or pop culture references:
As a kid, I used to sleep over at my gram's house and binge shows like "The Golden Girls" and "Murder She Wrote," so of course I appreciate a nod to my girl Angela, aka Jessica Fletcher. 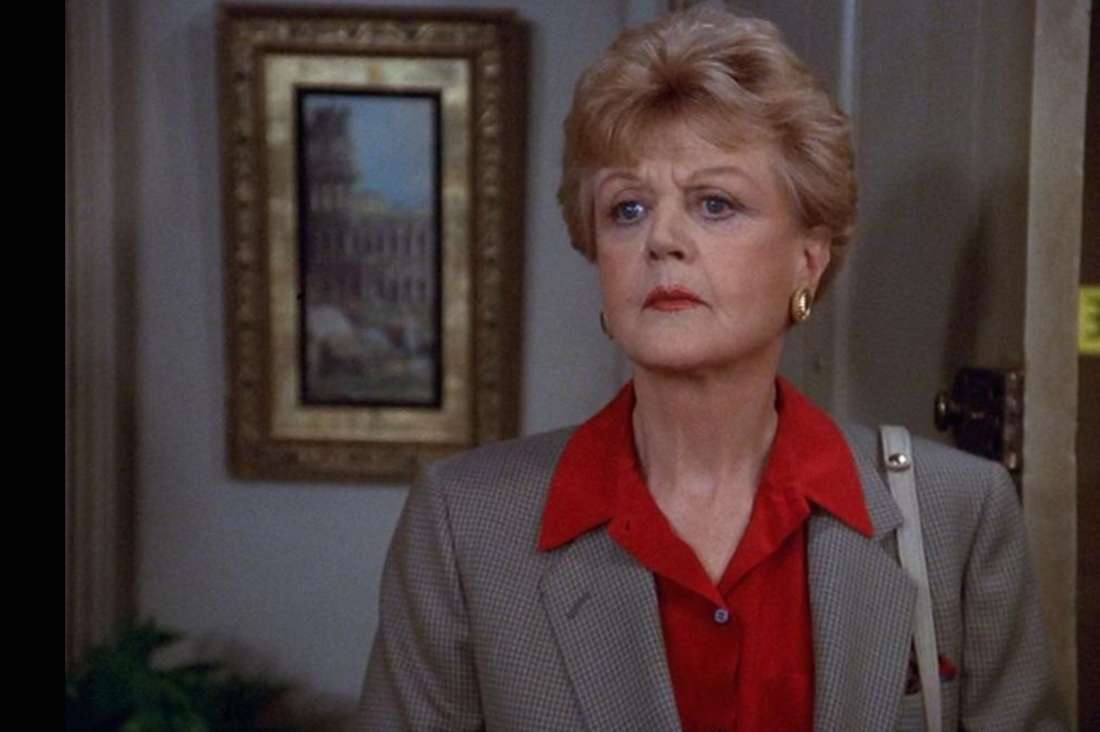 I think Jessica Fletcher and "AYitL" Emily Gilmore would totally be friends.

Here's how Richard describes his walk around Stars Hollow:

I saw the slinky, yes. And the hundred-year-old oak tree and the life-size yarn person. I even stopped by your house and had Babette introduce me to all of her gnomes.

Oh, and we find out that Al's Pancake World has the best egg fu yung in Stars Hollow.

Sharpest insult or one-liner:
I like that Jess knows the enemey:

Jess: You’re very popular right now. I bet if you burn a few books, they’ll probably make you mayor.
Rory: This is ridiculous.
Jess: I don’t know, bet you have a lot of supporters on this. Pat Buchanon, Jerry Falwell, Kathie Lee Gifford. 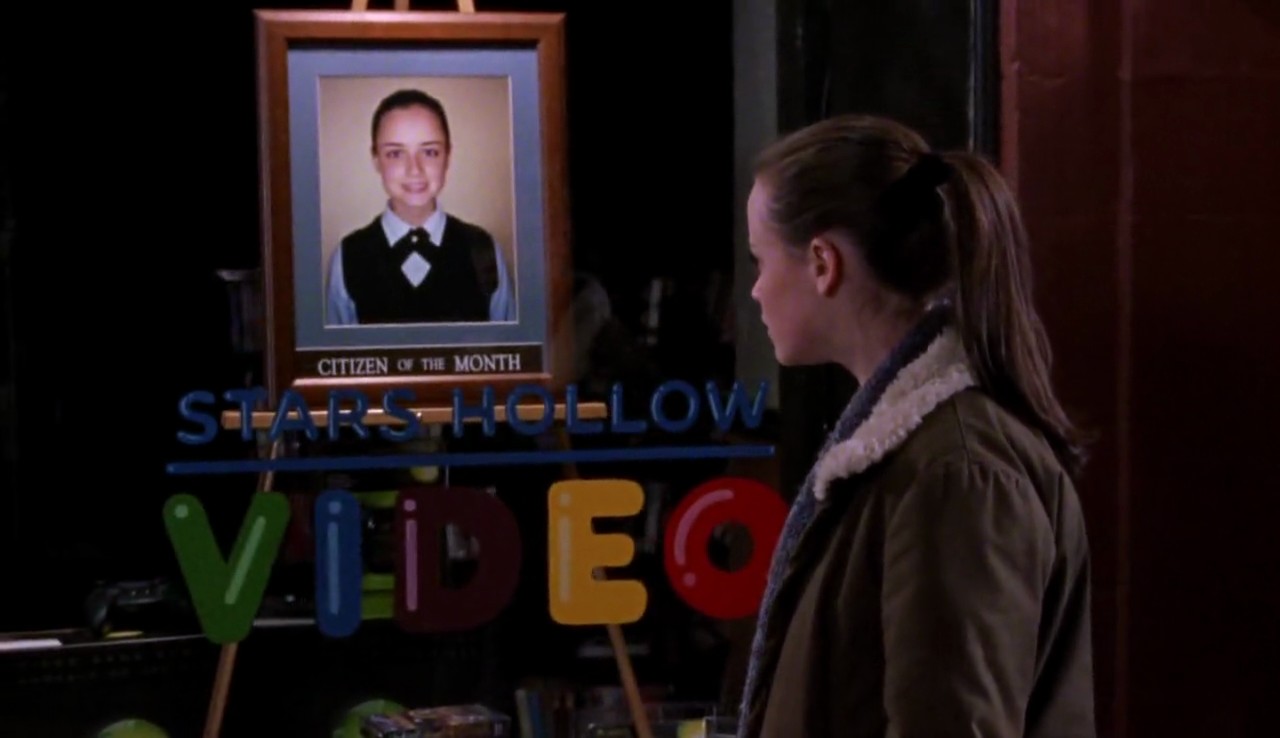 Books mentioned/books Rory is reading:
We don't see Rory reading any books, but Richard mentions, "a first edition Flaubert, mint condition, shoved behind several of my Churchill biographies." Whenever Rory shows Richard her book collection, I spotted "The Bell Jar" and "The Unabridged Journals of Sylvia Plath."

Best song of the episode:
The only song of the episode is "A Foggy Day in London Town" by George Gershwin. It plays when Richard arrives home after his day with the girls and lies to Emily about having eaten Chinese food for dinner.

Thoughts:
This episode always makes me sympathize with Lorelai and think about my relationship with my own dad. If he came to visit me for an entire day without my mom, I would probably kind of dread it. Not because I hate him and don't want to spend time together, but because we don't have very much in common and I don't think he really understands my life or the things I value. It's hard for us to connect and would take real effort on my part to find something for us to do together that wouldn't result in annoyance on one or both sides.

When I was younger, I used to get really mad at him for making suggestions about what I should or shouldn't do with my life. As I've gotten older, I've tried to suppress my rage and make more of an effort to understand his point of view. I once got into a huge argument with him in a Best Buy parking lot, circa 2012. He was buying a new TV and kept stressing over the fact that it needed straps to anchor it to the wall, even though it had a stand. I asked him why the straps were so important and he made a comment about being worried that a baby could easily knock the TV over and get killed. I asked him what babies were going to be visiting his house in the next ten years and he kind of gestured to me. WHEN I WAS NINETEEN. BEFORE I WAS EVEN IN A RELATIONSHIP.

So of course I flipped out on him and told him how ridiculous it was for him to plan his TV purchase around my hypothetical children. That it's especially stupid because I don't really want children and probably will never have them. And of course that made him sad, because he would love grandchildren and doesn't understand why I won't adhere to his vision of what my life should be like. Do you see where I'm going with this? Like Richard and Lorelai, my dad and I have a hard time relating to each other because our lives are very different and it's hard for us to understand views and desires that are so foreign to us.

I tend to judge Lorelai harshly most of the time, but I think she did a pretty decent job of dealing with her dad in this episode. She made Luke go get her a grapefruit in order to avoid conflict, she held her tongue when he judged her coffee consumption, and she avoided screaming obscenities at him whenever he chastised her in front of her employees.

Richard: Was that a business call I just overheard there?
Lorelai: Oh, that was my linen delivery guy.
Richard: So it was a business call?
Lorelai: Yes, it was a business call.
Richard: And that’s how you handle a business call?
Lorelai: I’ve known Manny for ten years, Dad.
Richard: I don’t care how long you’ve known him. You never talk to a business associate like that, especially not one that you employ.
Lorelai: Okay Dad.
Richard: These people have to respect you.
Lorelai: He does respect me.
Richard: You were flirting with him.
Lorelai: I said what I needed to say in order to get the linen before somebody else did. And I did, so I won.
Richard: This is not about winning, this is about proper procedure. You need to listen to me Lorelai. If there is one thing I know about, it is the correct way to conduct yourself in a position of authority. Do you understand what I’m trying to tell you?
Lorelai: Mm hmm.
Richard: Because I’m only telling you this for your own good.
Lorelai: Mm hmm.
Richard: All right, go back to work. I’ll be right here if you need me.
Lorelai: Okie dokie.

I understand that Richard likes feeling useful and that without his job, there aren't as many opportunities for him make an impact. Emily (and the revolving army of maids) handles things around the house, so it's not like he can chip in by offering to cook dinner or run errands. By offering up (unwanted) advice on proper business procedures, I'm sure Richard thinks he's doing Lorelai a service. I do believe that he loves her and wants her to succeed, but he's certainly self-aware enought to know she finds this annoying. He probably feels so obsolete that he can't help himself, though.

The last straw for Lorelai is when Richard finally questions her judgement of Dean's car in front of Rory. As much as I think Richard has some solid points - a car is a weird gift + how does Dean know it's safe - it's not his place to overrule Lorelai's authority. If Lorelai says Rory can have the car, then Rory can have the car. If Richard has concerns, he's certainly allowed to voice them, but it's fucked up for him to step in and act like the person with the power to make the final decision. 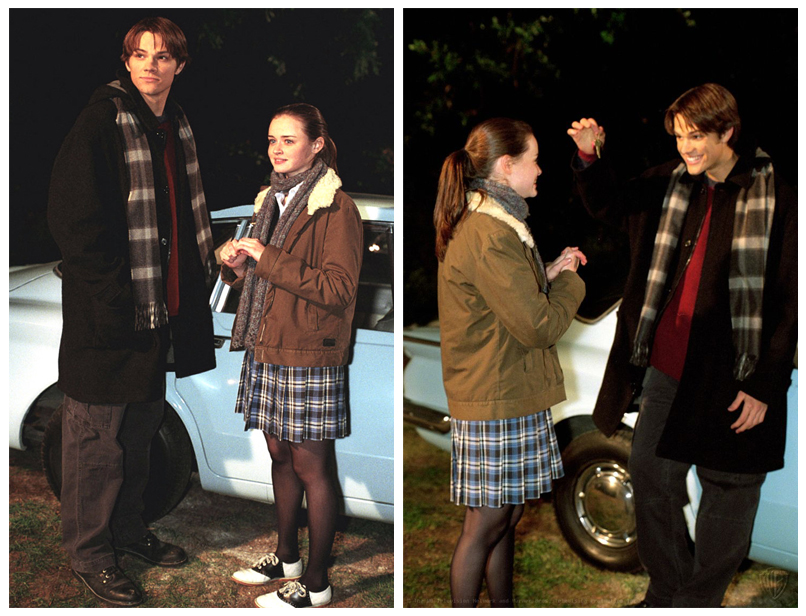 Stop smiling and prepare yourself for a lengthy visit to Gypsy's, Dean.

The end of Richard and Lorelai's conversation is well-written and makes me feel for both parties.

Richard: Don’t you think I know why you invited me here?
Lorelai: Because -
Richard: Because your mother asked you too. She called you up and said I was driving her crazy, and would you please take me off her hands for one day so she can get some peace. Isn’t that true?
Lorelai: No.
Richard: You have never once invited me to your house Lorelai, never. And I can hardly point to an event that would prompt you to do so except my recent employment situation.
Lorelai: Okay Dad, Mom did call me but -
Richard: You know, I never thought about retirement. I never thought about what I would do or what I would be once I wasn’t working. I never once imagined that I would go from being a productive member of the human race to a decrepit old drone sitting at the club at three in the afternoon drinking brandy and playing cards.
Lorelai: Aw, Dad.
Richard: I am an annoyance to my wife and a burden to my daughter. Suddenly I realize what it feels like to be obsolete. I hope that you never have to learn what that feels like. Now, if you will excuse me, I’m afraid I’ll have to take a rain check on dinner. I’m not very hungry.

Richard should definitely go to therapy. It's unhealthy to feel so tied to your job that you're completely lost without it. Get a hobby! Volunteer! For the first time in your life you feel useless? Boo-hoo. First world problems. But I get it. Richard is of a specific generation and he gets a great deal of power and satisfaction by putting on a suit every morning and conducting business. In order for him to value himself, he needs to feel valuable to other people. He knows what's going on ... that he's annoying everyone and that his presence or opinions aren't actually wanted. But he doesn't know what else to do. It's all very sad, and the final shot of him sitting alone in his office, at a loss for what to do, breaks my heart. 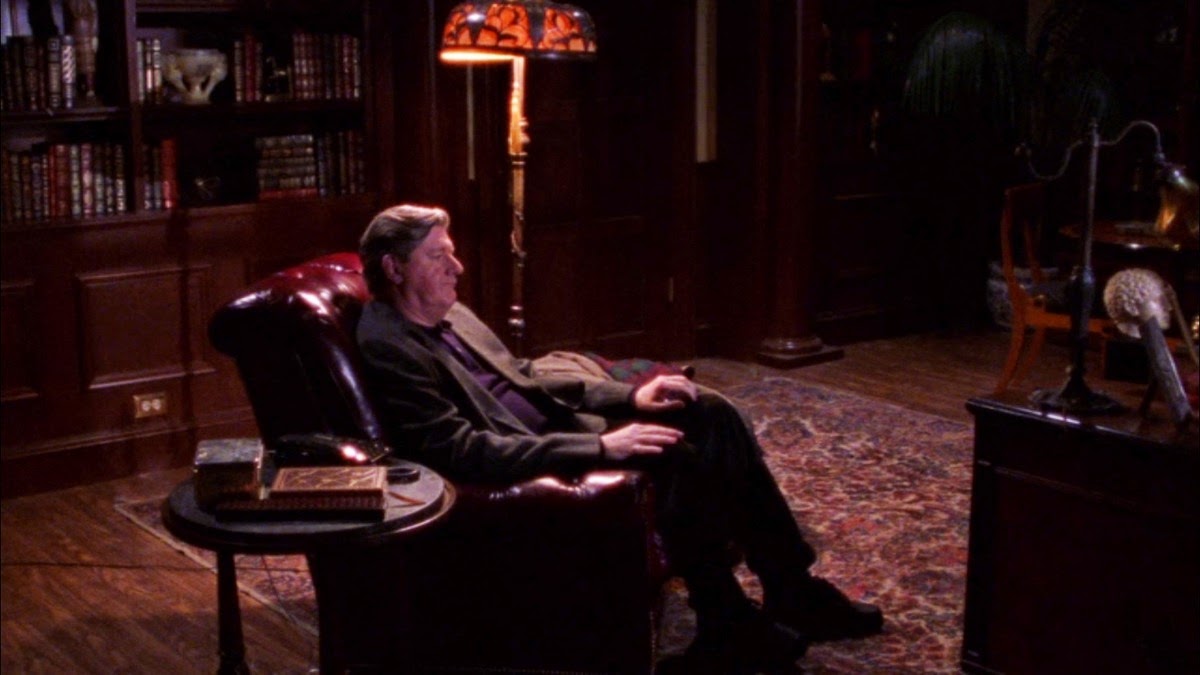 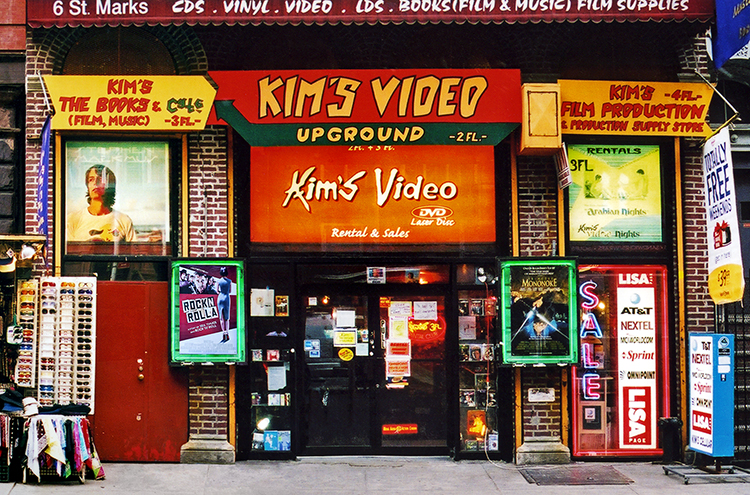 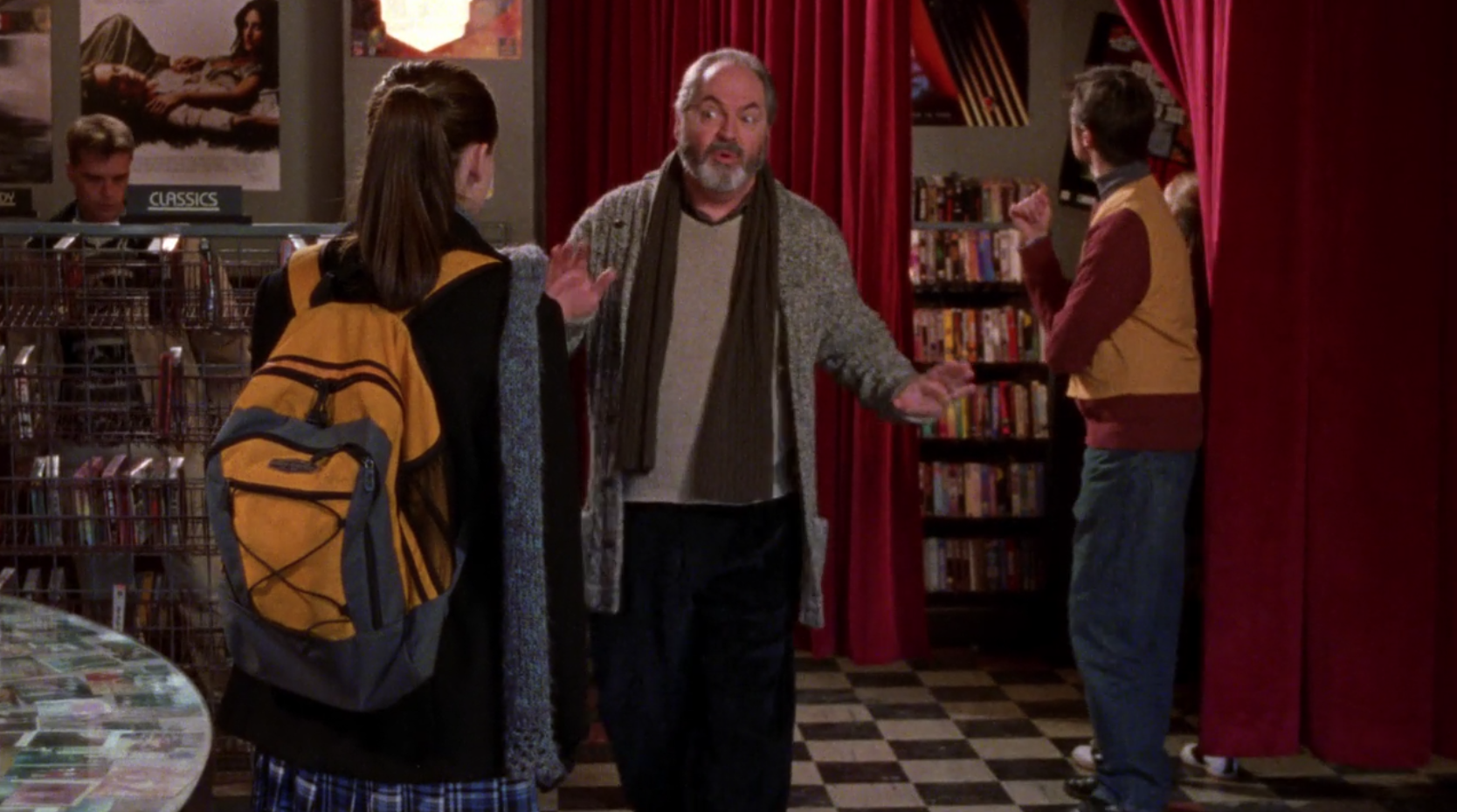 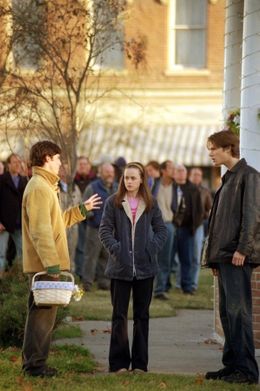 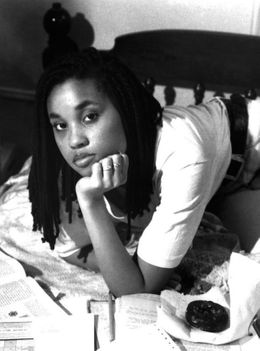